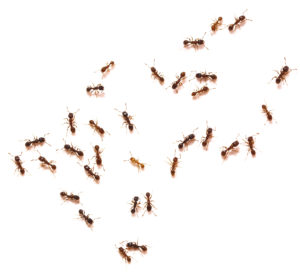 Ant control can in some cases be difficult and there are some important things to take into consideration when dealing with ants and their behavior which can lead to big problems for you and your home:

The ant life cycle contains four distinct stages: egg, larvae, pupae and adult. The completion of these stages is called metamorphosis. In general it can take several weeks to several months to complete the life cycle, depending on the ant species and other environmental factors.

A female ant that successfully mates with a male ant will become a queen ant that lays eggs. Fertile queens select a sheltered place to begin a nest (colony) and begin laying eggs. Ant eggs are very small – only about a half of a millimeter in diameter. The eggs are oval, white and transparent.

After about 1-2 weeks in the egg stage, a legless ant larvae hatches. During this stage the larvae has a large appetite, and the adult ants spend much of their time feeding the larvae with food and liquids they digest and regurgitate.

After the larvae molt and shed their skin, they grow into the pupal stage. Pupae appear somewhat like adults ants except their legs and antennae are folded and pressed against the pupal body. Initially, ant pupae are usually white, but slowly become darker in color as they age. Depending upon the ant species, pupae may be housed in a protective cocoon.

Once the pupal stage is complete, the ant becomes an adult. At the time of emergence, the adult ant is fully grown, but darkens in color as it ages. Adult ants are one of three different colony castes; queens, workers or males. Queens are fertile females that lay all the eggs in a colony. Workers are females that do not reproduce, but do gather food; feed the larvae; and maintain and clean the nest. Workers are wingless, and it is the worker stage that is seen foraging around for food or defending the colony from intruders. The male ants are winged, but their only job is to mate with the queens during the swarming process.